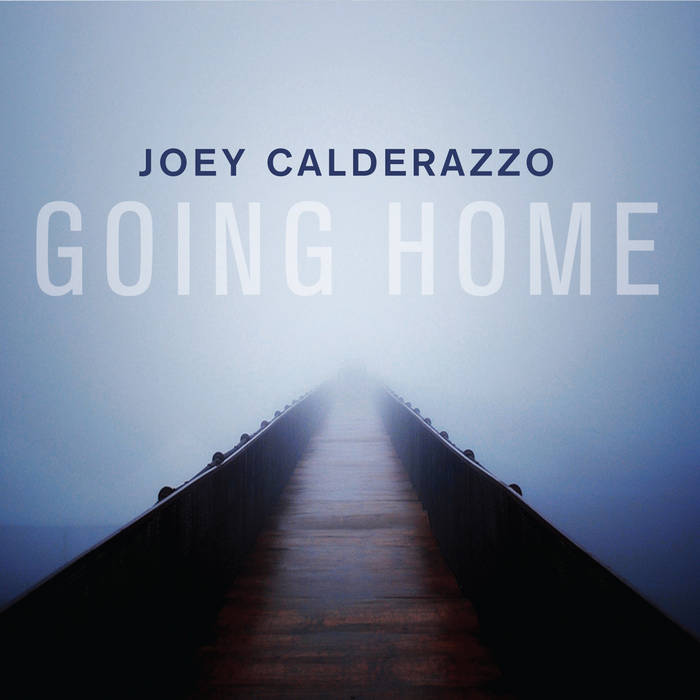 Finding opportunities for growth and development are important aspects in the process of evolving as a creative musician. Discovering and tackling new challenges helps to keep music-making a fresh and exciting occupation for many, including pianist Joey Calderazzo, who found his latest challenge in the form of the piano trio.

Since the beginning of his illustrious career, Calderazzo has mainly played in quartets led by remarkable saxophonists, namely Michael Brecker and Branford Marsalis. As a musician and composer, the pianist had become comfortable in this format, developing an intensity in his playing and predilections in his composing that those ensemble’s sizes demanded.

Calderazzo saw the establishment of his trio as a means to strengthen his craft by working on material and musical concepts that he would not ordinarily work on. He’s approaching things with a fresh and hard-won perspective, one informed by the peace of his North Carolina home for the past decade, years spent gigging and recording around the world, an unquenchable desire to just get better, and a keen awareness of what sort of project will get him there.

In light of the progress he has made in the trio format, Calderazzo views his new recording, Going Home (Sunnyside) as a snapshot of a work in progress, an experiment that continues to progress and wield an abundance of intriguing results. The recording provided an opportunity for Calderazzo to step away from his natural inclinations and approach the music in a new exciting way. He no longer felt the need to prove anything at the piano. He describes shedding both competitiveness with his contemporaries and a proclivity to sound like his idols. He simply doesn’t want to get in his own way — and the musical results are outstanding.

While a number of musicians have been featured in his trio, Calderazzo employed two musicians this time around whose contrasting strengths pushed the ensemble into fascinating new areas. Bassist Orlando Le Fleming was the instigator, continually challenging the group with his harmonic drive. Drummer Adam Cruz was a perfect foil as his controlled intensity and beautiful tone helped to refine the group’s musicality.

The music generated by the ensemble showed the musicians’ desire to balance freedom and responsibility. To stimulate this, Calderazzo intentionally wrote pieces and arranged two standards without too much structure, which created a focus on improvisation and group interplay, features that do not ordinarily stand out in studio recordings. The originals were generally sketches, moods or vibes, which provided a starting point for the ensemble’s explorations.

The program begins with “Manifold,” a ruminative piece based on twelve-tone composing techniques, utilized most notably in the bass notes being a part of the tone row, thus creating an ambiguous harmony allowing melodic freedom for the right hand. The distinctive Branford Marsalis is featured on “I Never Knew,” a ballad Calderazzo had begun for Marsalis’ soprano but was played on tenor, making it the first time Marsalis had played tenor on one of Calderazzo’s ballads. “Why Me?” is an exploratory, re-harmonized take on the Marks and Simons classic “All of Me,” which is built on a 6/8 over 4/4 pulse allowing Calderazzo to bounce freely over the time.

Perkins and Parish’s “Stars Fell on Alabama” is performed by the trio here for the first time, with Calderazzo focusing on playing melancholy melodic lines through the harmony, rather than focusing on every change of chord. One of Calderazzo’s older pieces, “Legend,” is performed open allowing the amount of information the tune provides to spur on an intriguing, in-the-moment performance. Originally presented on his duo recording with Marsalis from 2011, the spirited “One Way” is revisited here with an offbeat, New Orleans-oriented rhythmic swagger.

Having played it regularly in the past four years, Calderazzo reinvestigates one of his favorite standards, Young and Washington’s “My Foolish Heart,” in a somber, introspective mood. Written for his former bandleader, “Mike’s Song” is a piece that Michael Brecker would have destroyed and the trio’s performance does its best to live up to the saxophone legend’s tremendous musical spirit. “Going Home” closes the recording with an incredibly heartfelt and honest piece written in memory of someone who passed away too soon.

The fact that Joey Calderazzo views his recent performances and recordings with a trio as an experiment should highlight the fact that he wants to continue to hone his craft and progress as a musician. Going Home is a tremendous document of his musical process and a milestone of his progress, synthesizing his decades of creativity into something new, sublime, and supremely centered as a composer, improviser and bandleader.

Bandcamp Daily  your guide to the world of Bandcamp